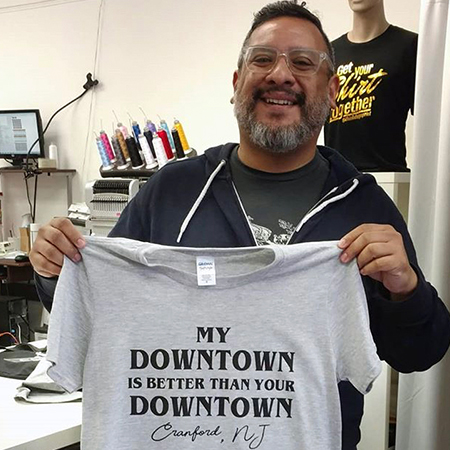 Cranford has earned some serious bragging rights after beating Westfield and other New Jersey business districts in a recent reader poll conducted by nj.com to crown the State’s best downtown.

To help celebrate {or maybe even rub it in a bit} the creative team at Think D’sign Print has unveiled one of its newest t-shirts. It reads in all caps: “MY DOWNTOWN IS BETTER THAN YOUR DOWNTOWN.”

The Cranford Downtown Business and Economic Development Office shared a photo of the shop’s co-owner, Dennis Concha, holding up the tee with the caption, “Nothing wrong with some Downtown Cranford pride.”

Cranford’s hub beat out downtown finalists; Westfield, Cape May, Morristown and Somerville in a weeks-long poll that netted about 67,000 votes, according to nj.com.